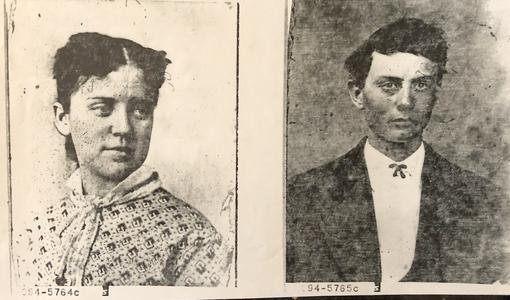 In an article about their golden wedding anniversary in the Bonham Daily Favorite on May 21, 1915, Smith Lipscomb said that they had been engaged for some time, but his absence in the army had prevented the marriage.  He came out of the army a penniless man,  He explained to her his financial condition and offered to release her from the engagement if she chose not to marry a man absolutely without money.  But her choice was to marry the many she loved and share his poverty.

"They came to Bonham in 1873.  Later Mr. Lipscomb was elected sheriff of the county . . . After retiring from the office he went to the farm . . . his home being the old home of Bailey Inglish."  To them ten children were born.  He also served as tax collector.

When he died "the stores closed from 10 to 11 o'clock this morning in honor of the passing of this well-known citizen, and county court, which was to have convened at 10 o'clock was postponed until 1 o'clock."   He and his wife are buried at Willow Wild in Bonham.

Many thanks to Mark Lipscomb for providing the memoir and these photos.

One of Fannin County's interesting men was Smith Lipscomb.

He was born in South Carolina.  He served in the Civil War from South Carolina during the entire war.  He was present with forces on April 12, 1861 when Fort Sumpter was fired on.  He served all through the conflict and was with Lee at the surrender at Appomattox.   He entered the army as a private and was promoted to lieutenancy and then to captaincy.  He took part in many of the big battles in which the army of Northern Virginia was engaged.

The following is from the Bonham Daily Favorite, December 5, 1923.

"The most thrilling experience of his career was when he was blown up in the famous crater explosion at Peterburg, Va., and when all but three members of his company were killed. How he escaped death, he could never understand. In 1907 Senator Daniels, while speaking at the reunion in Richmond, told of this incident, and said that though blown high into the air with tons of dirt and timbers and the mangled bodies of comrades, Smith Lipscomb came down on his feet and kept up the advance he had begun against the enemy's lines. He introduced Lipscomb, who was given an ovation."

"Only a few days before the crater incident, Mr. Lipscomb had been instrumental in saving the lives of Gen. Lee and Gen. Gracie. Elliot's salient constituted the fort at Petersburg on the Confederate side, while just across the narrow valley Burnside's troops were entrenched. The lines were in easy rifle range, and sharp shooters on either side did deadly work when any head or arm was exposed above the breastworks. Gen. Lee had gone, with Gracie, to inspect the salient, and being anxious to view the enemy's position, Gen. Lee stepped upon a parapet wall inside the fort which brought his head just above the wall of the fort. Realizing his chief's danger, Gen. Gracie at once placed his body between Lee and the enemy to protect him from the bullets he knew would come in an instant. Young Lipscomb, standing just in the rear of his superior officers, knew death would come to them if they remained where they were, so without ceremony he grabbed the skirts of their coats and gave a jerk which brought both of them from the wall. Even as they were falling, a storm of bullets swept the wall where they had stood, and which must have resulted fatally had they remained a moment longer. When Gen. Lee realized what had occurred, he saluted Lipscomb and said: "I thank you, sir, I thank you.""

"On a former occasion, before Gen. Lee was personally known to him, Mr. Lipscomb had an experience he never forgot. He was on picket duty with orders to allow no one to pass, when Gen. Lee came galloping up. The young sentinel stopped him, and would not permit him to pass until the officer in charge gave orders that the general of the army be allowed to pass. After he had gone by he turned back and said to the sentinel; "Young man, you did your duty.""

"Captain Lipscomb took part in the last futile battle before Appomattox court house, and saw Gen. Grant and Lee at the McLain house where the terms of the surrender were agreed upon. He received his parole at Appomattox on April 10, 1865, and sorrowfully but bravely took up his march back to the home state that war had devastated."

"A few weeks after returning, on May 18, 1865, he was united in marriage to Miss Sarah Warden Goudelock. In 1866 they came to Texas and settled first in South Texas on the Brazos river. In 1869 he moved to Fannin county, stopping at Ladonia. In December, 1873 he moved to Bonham and lived here until his death, just fifty years later." 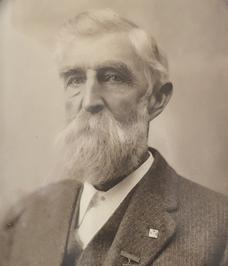