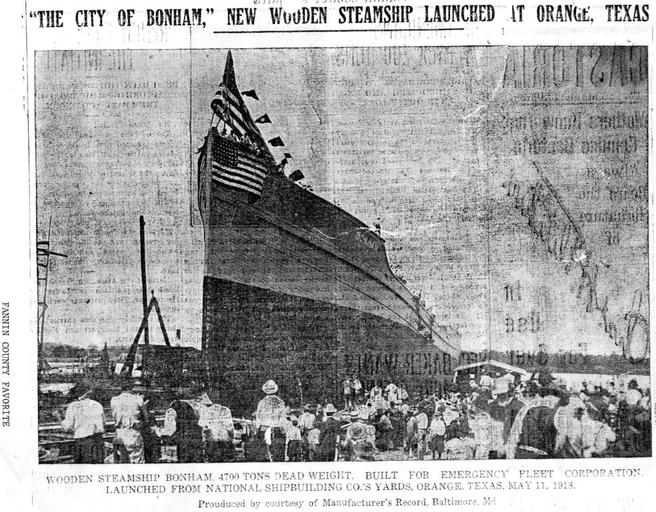 Even via the shortest crow-flight measurement, Bonham, at best, is 500 or more miles from the nearest ocean. True, river boats occasionally plied Red River during the nineteenth century and some evidence exists that indicates that at one time Bois D'Arc may have seen some barge traffic, but Bonham for all practical purposes must be considered land-locked. Why then was one of the three largest wooden steamships ever built named City of Bonham?

At 3:45 on the afternoon of May 11, 1918, the City of Bonham was launched at the shipyards of National Shipbuilding Company at Orange, Texas. Newspaper accounts reported that a huge throng attended the launching which took nearly thirty minutes to accomplish. The size of the vessel required an army of men to remove the wedges holding the props around the keel.

At a signal, just before the last restraints were removed, three young ladies performed the time honored ceremony by breaking a bottle of champagne across the bow. Elizabeth Elliott, Mabel Mattox, both of Orange, and Maud Evans representing the Bonham Board of Trade sent the ship down its launching path and into the Sabine River. Miss Mattox also read an original composition in honor of the event.

Bonham representatives on the ceremonial platform were Charles R. Inglish, secretary of the Board of Trade, Mrs. Inglish, Senator F.M. Gibson, Judge Rosser Thomas, and the Reverend and Mrs. S.A. Cowan, former residents of Bonham when the Reverend Cowan was pastor of the First Baptist Church.

The ship was constructed as part of the Emergency Fleet Corporation of the U.S. Government designed to carry food, clothing, and munitions to the allies on the battlefields of World War I. Two sister ships, War Mystery and War Marvel, were in various stages of construction at the same time. City of Bonham was the name chosen by Mrs. Woodrow Wilson. The reason for her choice was unknown but doubtless young Congressman Sam Rayburn was an influence in the selection.

.At the time of its launching, City of Bonham was the largest wooden steamship afloat. The vessel was 320 feet long, weighed 4,700 tons, was 47 feet wide and about 50 feet high from her keel to the bow. It was estimated that the ship would be able to carry 155 car loads of freight. It was also reported that every man, woman, and child with his dog in the town of Bonham along with most of their household goods could be carried on the several decks of the ship.

Speed was estimated at twelve knots or about fourteen miles per hour.

Several newsreel companies covered the event with cameras stationed at all vantage points to record the proceedings. The Bonham Daily Favorite reported several weeks later that one of the films would be presented at the Queen Theater.

In an interview with Charles Inglish during one of the newsreels, he was asked what was the reaction to the naming of the ship. Inglish responded, "It struck us like a clap of thunder from a clear sky when the message came to us that the world's largest wooden steamship was to be named after our city down at the new port at Orange."

​At this point nothing is known of City of Bonham's war service. And her fate remains a mystery. Perhaps somewhere in the scattered archival repositories of Washington, D.C. are the answers.