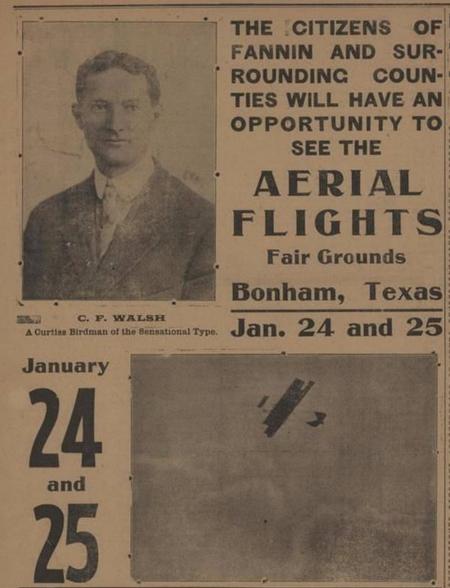 This ad is from the Honey Grove Signal.

It's not known how many young ladies named Josephine were in attendance at the racetrack at the Bonham Fairgrounds on the afternoon of January 25, 1912, but there surely must have been one or two of the name. And it might have been well in order for the 1910 ditty "Come Josephine In My Flying Machine" to be designated as the afternoon's theme. At 3:15 p.m. the air age arrived in Bonham in the person of famed aviator Charles F. Walsh and his Curtis bi-plane. Walsh was in Bonham as the representative of the Curtis Aviation Company to present a series of flying exhibitions during the next two afternoons.

A crowd estimated at over two thousand persons witnessed his arrival.

In the short nine years after the Wright brothers exploit on the beach at Kittyhawk,in 1903, aviation had seized the imagination of nearly every person in America. Despite the naysayers who predicted; that nothing would come of the fad or those who declared it morally wrong for man to emulate the birds, powered flight was at the foremost of American interest in the first two decades of the new century.

In answer to the public's demand for demonstrations, information, and participation in the new age, many aviation companies and many a daredevil barnstormer covered the nation in celebration of the Kittyhawk miracle. It was for just such reasons that Charles Walsh arrived in Bonham on a clear crisp January day to begin his two day exhibition of flying skills in the Curtis 60 horsepower bi-plane.

After the first announcement, in early January, that Walsh would make a stop in Bonham on his cross country tour, interest in the event was foremost in the conversations of the Bonham citizenry. The local papers did their part in whipping up interest by daily and weekly accounts of previous demonstrations and performances by the famed aviator,

The initial exhibition was scheduled for midafternoon on January 25th and a second exhibition the next day. News accounts reported that much of the large crowd was composed of out of town visitors with an especially large delegation arriving from Honey Grove.

At the appointed time Walsh took off down more than 150 feet of the dirt track for the first of his three flights of the day which brought "a roar of applause from the eager and anxious spectators;" as reported in The Bonham Daily Favorite. In the first flight Walsh attained an altitude of 800 feet in the plane, circling the entire fair grounds and demonstrating his versatility with loops, dips, and glides that lasted for ten minutes climaxing in a series of downward spiral glides landing within 50 feet of the racetrack grandstand.

The second flight took place some twenty minutes after the first landing and was obviously designed to give the crowd an even more spectacular view of the aviator's flying skills. His takeoff was considerable shorter than the first and a sudden nose-up maneuver thrilled the crowd into a long period of loud cheering according to press reports. During this flight he attained an altitude of 3000 feet and remained in the air for a ten minute display of dazzling aerobatics.

The third and final exhibition of the afternoon came when Walsh raced a 50 horsepower Kissel automobile. Both the plane and the auto made an even start down the racetrack but before they arrived at the first turn of the one mile track, the plane had outdistanced the Kissel and was speeding far ahead. Three laps of the track were made with Walsh completing the course in under four minutes. Percy Gauldin of Honey Grove drove the Kissel.

After the race Walsh remained in the air for several more minutes giving a continuing exhibition of the graceful manuevers the bi-plane was capable of under his experienced hands. After the demonstrations were completed, members of the crowd were allowed to view the marvelous machine at close proximity.

The next day's program was essentially the same except that the Daily Favorite reported that some of the aerobatics had to be curtailed because of a high wind whistling out of the north. The paper's reporter wrote that the crowd was somewhat anxious because the high winds were making Walsh's feats all the more perilous.

At 4:00 p.m. Walsh dipped his wings in salute and turned the nose of the plane westward. At that moment an unnamed Bonham businessman telephoned Dr. E,E. Barclay, secretary of the Sherman Young Men's Business Association, with the news that Walsh was on his way.

It was later reported that Walsh arrived at the Austin College Athletic Park, circled it one time before landing in the middle of the field, after having covered the 25 mile distance in just over 38 minutes.