Everyone Was Sad: The Boys Were So Young

It seems to be growing more commonplace to read in the media where some person or another has reached their one hundredth birthday. With today's advances in medical science, better nutrition, and changes in life styles, it seems that more and more people are increasing the ranks of the centenarians in this country.

But as recently as forty-seven years ago it was relatively uncommon to know of many such individuals. Bonham, however, had one gentleman who not only joined those selected ranks, but who also had other achievements of importance along with his longevity.

Joseph Hayden Whitsett, more respectfully known as "Uncle Hade," reached that impressive age on September 18, 1947 at his home on North Center Street in Bonham. Perhaps more importantly than his age was the fact that Uncle Hade, on his birthday, was one of the few Texas survivors of that dark and bloody period in American History called the Civil War.

​
Not only was he a participant of that era, but he was a bridge between an older and fast disappearing way of life and a new and complex civilization in the mid twentieth century.

Hade Whitsett was born September 18, 1847, at Glasgow, Kentucky, the son of Dr. and Mrs. Edmund Whitsett. In 1853, Dr. Whitsett brought his wife and four children to Fannin County where they settled on a farm near Shiloh just to the southeast of Bonham. A fifth child was born after the move from Kentucky. Dr. Whitsett combined his love of farming with a rapidly growing medical practice and became a well respected Fannin County physician.

Joseph Haden Whitsett lived the life of a typical farm boy in the mid-ninteenth century. Despite the usual assigned chores around the family farm, Hade found plenty of time to participate in hunting and fishing expeditions. As he was to later admit, hunting sometimes took precedence over some of his other obligations.

He received his schooling at Fannin County School #12 where his father was a sometime trustee. Probably his rural education was no better or no worse than that to be acquired at most rural Texas schools. Whitsett may have had some slight advantage at one time for his teacher in the late 1850's was the respected educator, B.F. Fuller.

When the guns roared at Fort Sumter, young Hade was caught up in the war fever that ran throughout the county. He once told of seeing the organization of two of the county's home militia units at the Fannin County Courthouse in the early days of summer, 1861. Like many another young southern males, he saw no reason that should prevent his becoming a member of such an organization as the Bonham Dragoons or Stanley's Light Horse Company. There was no obstacle at all except for the fact that he was not quite 14 years old and in those early days of the war, 14 was still considered to be too young to march off to battle.

In his later years Hade would speak from time to time of his experiences during the war, but if he described them in detail nothing was ever written or published about his experiences. However, a story concerning Whitsett's participation in the latter part of the conflict was detailed in the 1930's by a researcher and writer on the Van Leer family of Fannin County. Hade Whitsett was interviewed extensively by the writer in 1931.

When William Quantrill and his band of guerrillas arrived in the area in the winter of 1863-64, one of Quantrill's lieutenants was a young Missourian named Sim Whitsett, a distant cousin of Hade Whitsett. It is assumed that Sim Whitsett called on his relatives in the Shiloh Community where three young, eager teenagers listened with awe as he probably recounted some of the exploits of the Quantrill group. Two of the young boys were Anthony Van Leer and William H. "White" Ragsdale, both neighbors of the third boy Joseph Haden Whitsett.

In an interview with Mary Ragsdale, in 1931, she old of the three boys gathered at the Ragsdale home the night before they left to join Quantrill's group. She said that the group played the piano and sang "The Girl I Left Behind." "Everyone was so sad, because the boys were so young."

Shortly after this Quantrill affected his famous escape from the Fannin County Courthouse and fled to Indian Territory where he was to be joined by the remainder of his band which now included Whitsett, Van Leer, and Ragsdale. The guerrilla band, already in a state of disorganization, split into two factions upon arriving in Missouri. The three Fannin County youths joined with another of Quantrill's lieutenants, named George Todd.

In his 1931 interview, Hade Whitsett recalled, "When on bivouacking, after a hard day and the other boys would drop down too exhausted to make up their beds, White and Anthony would make a great sport of making up their beds and then would do a dance around their laid out blankets and sleep on the hard ground."

On October 11, 1864 Whitsett and the two other boys were assigned to Joe Shelby's cavalry division of 12,000 Confederates. Under command of General Sterling Price the army made its last offensive thrust west of the Mississippi at the battle of Westport, Missouri. The rebel forces were whipped and driven down into Arkansas, effectively ending the war to the west of the Mississippi River.

By November the company was on its way south to Texas where it eventually set up camp near Corsicana. It is during these final days that Hade Whitsett received the only documents of his service that were to survive. In his pension application of 1930 he submitted as evidence three original passes issued by M.M. Langhorne, Captain of Shelby's Escort and a receipt for the surrender of Whitsett's Cavalry Sabre. One of the passes, issued March 25, 1865 reads: Hd Qrts. All Guards and Picquets of the C.S.A. will pass Haden Whitsett of Shelby's Escort to hunt his horses & return this evening, (s) M.L. Kritser, 0. Sgt. M.M. Langhorne, Capt, Cmdg. Escort.

With Lee's surrender, Joseph Haden Whitsett was released to return to his home in Fannin County to a life that was to stretch for 86 more years. He died at his home in Bonham on August 5, 1951 just one month and three days short of his 104th birthday. He was laid to rest next to his wife of 57 years, Betty Stone, in Willow Wild Cemetery. At his death he was one of three surviving Confederate veterans in Texas. 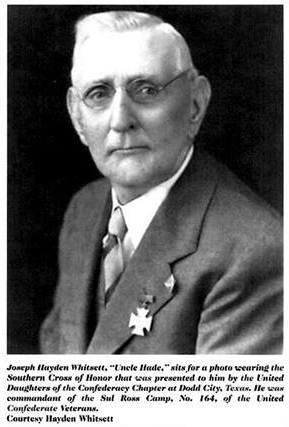