Charles Carlton's stay at the Georgetown, Kentucky church lasted only one year and he next accepted a position at Lexington, Missouri. Once again, seeking more beneficial employment, he was asked to move to Van Buren, Arkansas. He resigned his position at Lexington and made arrangements to move his family to the new appointment in VanBuren.

Upon their arrival in town, Carlton discovered that the position had already been filled by another minister and the congregation had failed to notify him before he resigned and made the move. The lack of a ministry, however, failed to discourage the young Englishman.

Using some funds available to him and calling on his previous acquired skills in the shipbuilding trade, Carlton set to work and constructed a schoolhouse in the town. Once again his determination and perseverance served to attract the notice of many of the citizens of Van Buren with the result that in a short time Carlton had a number of students enrolled at his school.

Over the next several months he traveled throughout Missouri preaching at a number of churches. On one of these trips he became acquainted with the wife of Governor Phelps of Missouri .

Mrs. Phelps was aware that the citizenry of Springfield were expending an all out effort to establish a first class educational institution in their city and through her efforts she was able to have Carlton hired and moved to the town.

Once again Carlton called on his construction experience and with the help of a number of residents of Springfield, a 1arge ,comfortable stone building was erected and soon a flourishing school for both boys and girls was in operation. In addition to his educational duties, Carlton also preached for a local church.

In 1861 his wife Harriet, after an extended illness, died, leaving a bereft husband, one son, and three daughters. Some weeks later Charles Carlton married Mrs. Sally Fry, a widowed friend of the family. Carlton and his four children moved to Mrs. Carlton's farm outside the city of Springfield to escape the terrors of the Civil War which was then making its presence known in the area.

The war situation caused Carlton's school to suspend operations and with a growing threat to the civilian population in the area Mr. and Mrs. Carlton decided to leave Missouri and take their family to Collin County, Texas to be near Mrs. Carlton's sister.

The family attempted to farm for a year but were not too successful in their efforts so Carlton decided to try to support the family once again by establishing a new school. Dallas, a few miles south, seemed offer the best opportunities so in the autumn of 1862 the family moved to Dallas.

A distinct lack of suitable quarters proved to be an obstacle until he was able to rent the second floor of a blacksmith shop. Pupils who were able to pay their tuition were in short supply and the Carlton family were in need of those supplies that they could not raise for themselves. In order to help provide for the family, Mrs. Carlton, using a loom constructed by her husband, wove not only enough material for use by the family, but she was also able to use the surplus to exchange for other need provisions.

As the war wound to a close, Carlton made plans for the family to return to Springfield where he hoped to be able to resurrect his school and resume his preaching career. Retracing their earlier steps, the family joined a wagon train as it moved to Collin County. At a stop in Kentuckytown, the Carltons met old friends from Springfield who were fleeing the war's aftermath and turmoil that was rampant throughout their old homestate. The friends advised the Carltons to delay their return until the situation became more settled.

With his usual ability to build on his adversity, Carlton set about organizing a school in Kentuckytown and taught there for two years. It was during those two years that fate once again introduced a new element into Carlton's varied and influential life.

One day two young men, recently separated from the Confederate forces, arrived on his doorstep seeking an education. Randolph and Addison Clark, sons of newspaperman Joseph Addison Clark, had heard of Carlton's reputation in Missouri and decided to avail themselves of the opportunity to study under the guidance of this respected educator and minister. It is unclear whether or not Randolph actually remained at the academy in Kentuckytown as did his brother, but he was later to come under Carlton's influence in Bonham.

As we shall see later ,the intertwining of the careers of these three men is something of a hallmark in the development of Christian education in Texas. Like their mentor Carlton and their father Joseph Clark, both men were ordained ministers in the Disciples of Christ Church.

​But the most interesting aspect of this relationship hinges not only on Carlton's influence but also upon the accomplishments and contributions of two of Charles Carlton's most notable students. Both of the Clark brothers established a number of educational facilities in Texas, most notably Add-Ran College in Thorpe Springs.

The name Add-Ran College is unfamiliar to most Texans except perhaps for graduates of one of Fort Worth's more venerable institutions, Texas Christian University. Under control of the Christian Church in Texas, Add-Ran College became the flagship college of that denomination. In fact, as shall be discussed in more detail later, Add-Ran College narrowly beat out Carlton College for that position. 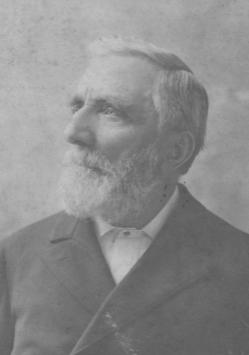