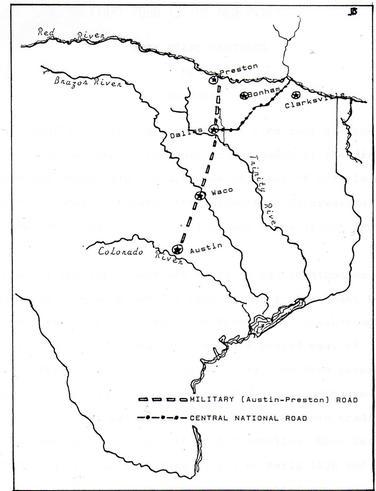 Note:  At one time there was an historical marker for the Central National Road at the juncture of FM 904 and Highway 64.  Sadly it was stolen some years ago.

Although the Military Road gave reasonably good access to Red River for those persons throughout the central area of the Republic, in many instances high water on the river concealing sandbars and other obstructions prevented any travel downstream from the terminus of the road at Fort Preston. What was needed was a road connecting the central areas from Austin northward to a more easterly point on the river. The most likely place was near Jonesborough, in Red River county just opposite the mouth of the Kiamichi River.

The Northern Standard in an edition on March 27, 1844 printed the following notice: "We the undersigned commissioners appointed by Congress to lay out the Central National Road from Trinity to Red River will meet the two other commissioners on the Trinity River on the 5th day of April next to commence operations. Those who wish to make contracts for opening said road would do well to accompany the commissioners. Signed: William M. Williams, Jason Wilson, John Youree."

Six weeks prior to the publication of the notice Congress had created a five man commission to select the right of way, arrange for the route to be cleared, and supervise the construction of any necessary bridges on what was designated the Central National Road of the Republic of Texas. The route was to begin at the banks of the Trinity River not more than 15 miles below the mouth of Elm Fork and was to follow a northeasterly course to its termination opposite the Kiamichi.

Major George Stell of Paris was appointed surveyor for commissioners Jason Wilson and William M. Williams of Lamar County, John Youree of Fannin County, Rowland W. Box of Houston County, and James Bradshaw of Nacogdoches County. Why the latter two, representing counties far to the east of the proposed route, were appointed to the group is unclear. It has been supposed that there were discussions about a connecting road from the Trinity to the vicinity of Nacogdoches but no such action was ever authorized.

Les's than two months after the enactment of the bill, Stell and his party began to survey the proposed route and completed the work in 30 days. The starting point was marked by a cedar tree on the banks of the Trinity; the exact location is not known but many historians believe that the most logical place would have been near John Neely Bryan's crossing at the river near present day downtown Dallas.

From the origination point the route followed a generally eastward course to a point just inside the present Rockwall County line. Here the surveyors turned sharply to the northeast across the south-east corner of present day Collin County toward area covered by Wildcat Thicket. North of present day Wolfe City, the route again took a slight northerly turn paralleling the current line between Fannin and County lines.

Near Ladonia the road once again turned to the northeast crossing the southeast corner of Fannin County passing just to the south and east of Fort Lyday and in to Lamar County. Next the road passed just north of Paris to the Red River County line. It continued on that same northeasterly track for nine miles within Red River County until it reached Travis Wright's landing opposite the mouth of the Kiamichi six miles above Jonesborough. Sections of the Fannin County trail are still somewhat evident just to the north of Ladonia off of FM 904.

This new route enabled Texas to be connected with roads leading to Fort Gibson, Fort Towson north of Jonesborough, and other old roads connecting the area with settlements in Arkansas, most notably Fulton and Fort Smith.

The southern terminus connected with the Military Road completed from Austin to Preston Bend in 1840/41. In effect what was now available was a direct roadway from San Antonio to St. Louis and a waterway connection from Fulton Arkansas down river to New Orleans or up river to Memphis.

The Texas Congress in creating the National Road had visions of an important international artery from Mexico City to the central United States. However the population shifts brought about by the westward movement of the frontier and the advancement of civilization lessened the importance of the route as new and better means of access were created.

Persons of Fannin County did benefit from the National Road.  The County Commissioners ordered the creation of a new route from Bonham to the southeast to intersect with the road north of Ladonia. From that point travelers would have an easier way either to the south or to connections in Red River County. Those residing along Red River could take the already established River Road from Preston to Fort Warren, Lexington, Craven’s Trading Post and Jonesborough. The connecting Ferry at Jonesborough and/or Wright's landing then provided access to further points without the uncertainty of river travel.