The Military Road to the Red River

Transportation throughout the vast area that was the old Fannin County was one of the more urgent needs of the first settlers. Although the region did contain wide expanses of prairie much of it was thickly wooded, crossed with innumerable waterways of varying size, and not conducive to travel by any means except foot or horseback.

Many of the first settlers chose to settle along on near the banks of navigable waterways and for Fannin County this meant Red River.  Their choice was based on two considerations. Jonesborough, some sixty miles down river, was the first designated seat of justice for northeast Texas and all official business from deed records to marriage licenses had to be procured from the courthouse there. The other consideration was the availability of certain trading posts where the settlers could obtain needed supplies. Abel Warren had abandoned his operation at Fort Warren by early 1836 and moved some fifty miles upstream. Fulton and Craven's United States Store north of present day Paris was more than thirty-five miles downstream. For more extensive supplies a several day boat or raft journey to Fulton, Arkansas was required.

Water travel was then the most feasible in those early years. At best Red River offered something of a perilous journey to any destination. To offset these perils Fannin County officials, as soon as the county became organized, ordered the creation of the River Road paralleling Red River from Coffee's Station at Preston to Fort Warren, Lexington (near Daniel Rowlett's settlement), Raleigh, the U.S. Store, and finally to Jonesborough, then county seat for Red River County.

Specifications for the road required an eighteen foot width, cleared of all brush and obstructions with no stumps more than eight inches in height. Landowners between Preston and the county's eastern border were required to maintain that portion of the road that passed on or near their surveys.

The River Road answered the immediate needs for easier travel in the region but any trips to the interior of Texas provided a number of obstacles and the nearest roadway, Trammel's Trace,was many miles to the east. There was some river travel on the Trinity and Sabine rivers but overland travel was most often the mode despite flooded streams, dense growth, and the virtual lack of any maps or recognizable guides to help plan a route.

The Republic of Texas attempted to rectify this situation by inaugurating two road systems from the capitol at Austin to connect at two points on Red River with established roadways in the U.S. territories. The first of these systems was called the Military Road or more commonly the Austin - Preston Road.

Congress on December 21, 1838 enacted a law for a series of frontier forts to be established along a line from opposite the mouth of the Kiamichi River ( in Red River County) to the crossing of the old San Antonio Road at the Nueces River. The forts were to be connected by a road cut by military personnel. There is no evidence that the eastern leg between Bois d'Arc and the Kiamichi was ever laid out but the western leg at the extreme limity of Fannin County near Cross Timbers was in operation by 1840 - 41.

A detachment of men under the command of Colonel William G. Cooke was commissioned to survey a route from the Brazos River to Red River. A report he sent from his camp on Bois d'Arc November 14, 1840 detailed the difficulties experienced by the surveying party.

Cooke took command of the company at Little River north of Austin On September 9th. By the 19th they were encamped at the Waco village waiting for the supply train to catch up with them. At Chambers Creek in present day Ellis County they ran low on drinking water and some of the company turned back in order to replenish supplies. The group was attacked by Indians a few miles to the south but experienced only minor casualities.

Progress of the survey and construction was slow for the next several weeks. Rainy conditions throughout the period made certain creek and river bottoms impassable at times. The company soon exhausted their food supplies after the cattle they were herding had been driven off by the Indians.

Later some of the company remained in camp to the west of the Trinity under command of Lt. Colonel Clendenin. Cooke marched the remainder of the troops on a northeast track. About a week after leaving Clendenin, Cooke and the men reached a thicket which they supposed to be the headwaters of the Sabine. From his descriptive analysis it seems likely that they had reached the area along the Fannin-Hunt county border where the infamous Wildcat Thicket was located. In his report he stated that it took the company five days to cut through the thicket until they finally reached a trail that  that led to the settlement of Bois d'Arc (Fort Inglish). Cooke reported that on their arrival the company was treated most hospitably by Bailey Inglish who also furnished them some fresh supplies.

His report also decribed a spot he considered to be advantageous for the construction of a fort on Red River about 10 miles above Coffee's Station. The post was named Fort Johnson. Cooke also made arrangements to establish a supply post at Coffee's Station which later became Fort Preston.

Although no exact specifications of the Military Road are extant, it is believed that the way led from Red River through John Neely Bryant's settlement on the Trinity directly south to Waco Indian village and then on to Austin. All or parts of Preston Road in north Dallas follow the old trail and takes its name from the northern terminus of the original road.

Next week the Central National Road. 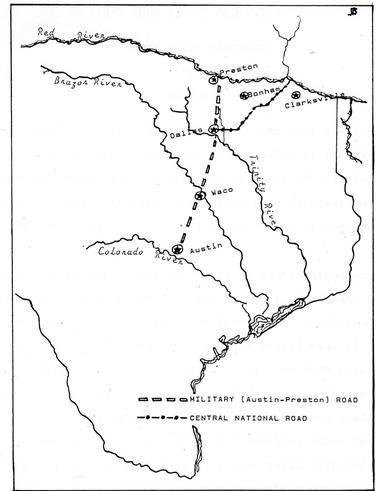