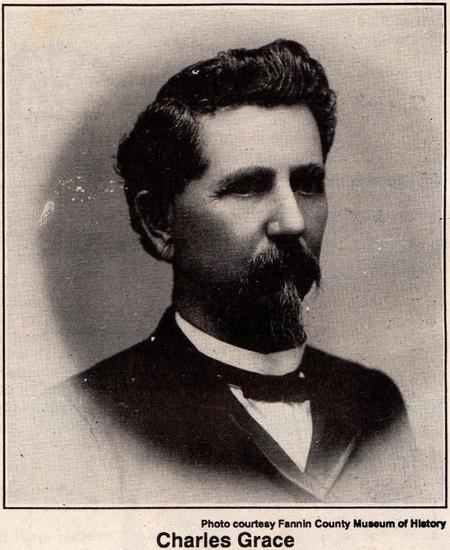 Surrounded by a war filled with moments of drama, of incidents and events almost too bizarre to be true, of uncomprehendable brutality and carnage, little Spotsylvania County, Virginia had more than its share of turmoil. Three of the most devastating battles of the Civil War ranged in and around the area, Chancellorsville, The Wilderness Fight, and the battle for the tiny hamlet of Spotsylvania Courthouse.

One singular incident at the Spotsylvania Courthouse campaign impacted the life of a Bonham man more than any other single event in his life. In one explosive second Charles Grace altered the course of history by some degree.

Today, Grace is best remembered for a series of incidents concerning his famous telegram to the mayor of St. Louis upon the occasion of the opening of the Western Union office in Bonham.

Grace's brush with fame goes back much further than that one bit of practical joking in the late 1880's. He was a true son of the South born in Georgia, Sept 1, 1842. His father was a noted Methodist minister and his mother esteemed for her piety and charitable works. From early childhood both parents instilled in him a sense of duty to his God, to his country, and to his neighbors.

After completing his basic education, Grace began to read law with Senator Ben Hill of Georgia. Hardly had his law preparation begun when the guns were fired at Fort Sumter. Grace answered the call and within hours of the opening attack he was sworn into Company B, Captain Fauntleroy Todd's 4th Georgia Regiment, Colonel J. M. Matthew, Doles Brigade. Later that month he was officially mustered into the Confederate .Army at Norfolk, Virginia.

He soon proved his skill in military matters and was recommended for promotion to officer rank. The Secretary of War never issued the Commission so Grace served throughout the war with the rank of private and corporal. The title "Major" by which he was known in Bonham was a courtesy acquired somewhere between his Georgia home and Bonham.

No research as been done into his early career during the war except that it is known that he was placed in charge of a group of sharpshooters organized as a special unit of his regiment. Some of his old companions stated that he was the best of that group.

By late spring of 1864 Grace's company had moved into central Virginia in preparation for an expected new campaign against General Robert E. Lee. The Confederate troops were dug in west of Fredericksburg and southwest of Chancellorsville, in an area called "The Wilderness."

The first contact between the opposing armies was made on May 5th near the old Wilderness Tavern on the Chancellorsville Turnpike. For the next three days General Grant launched continuous attacks against the Confederate forces with a resulting jumble of disorganized troops along the Confederate lines. Because of the incessant cannon fire the brush between the lines caught fire and the resulting blaze detered any type of attack. Lee withdrew his men assuming that they had taken the day and the Battle of the Wilderness was at an end. Grant had lost about 17,500 men and Lee less than 8000. Grant was determined to get the upper hand by spreading his companies between Lee and Richmond. At this point Lee fully expected that the Union forces would turn tail and head north.

Lee, having no intelligence to apprise hint of Grant's movements, ordered his troops toward the small Virginia village of Spotsylvanis Courthouse. During the darkness of the May 7th night Grant was also moving his men in the same direction with the intention of arriving at the village before Lee's men. The town was where the region's main roads crossed and was of vital importance to both sides.

If the Union Army could get there first they could effectively cut off Lee's run for Richmond. However, Fitzhugh Lee, the general's nephew, stalled the Federal troops with his cavalry unit until the Confederate infantry arrived and took possession.

Lee's trench system at Spotsylvania was masterfully organized as described by Union Colonel Theodore Lyman, "the first day a good rifle pit; the second a regular infantry parapet with artillery in position; and the third a parapet with abbatis in front and entrenched batteries behind."

Grant ordered the generals of his command into various positions facing the Confederate earthworks and began the battle of Spotsylvania Courthouse which was to last until May 19th.

May 9th Major General G.K. Warren and Major General John Sedgwick attacked the forces of Confederate General Richard S. Ewell (Charles Grace's Doles Brigade was a member of this corps). Their efforts were ineffectual and the troops were withdrawn to their own entrenchments. For two more days Grant continued to probe the Rebel lines with little effect.

During this time he lost one of his able generals, Major General John Sedgwick. The VI Corps commander was walking the parapet above where his troops had entrenched themselves. Despite warnings from the men he continued this activity and attempted to allay their fears by stating that snipers "couldn't hit an elephant at this .    . . The muffled pop of a single musket fire broke the calm as the ball from a Confederate sharpshooter caught the general between the eyes, in mid sentence.

All official records and other accounts of the incident fail to identify the sniper. An examination of the extant records of this historic Virginia battle show Grace's brigade under Colonel Dole's command was entrenched immediately opposite from where Sedgwick met his fate and the front line of Dole's brigade was composed of a select rank of Georgia sharpshooters. Charles Grace laid claim to the skill that ended the Union general's life.

In later years Ashley Evans, editor of The Bonham News interviewed too old companionsin arms of Charles Grace, who, in essence, told the same story that Grace had repeated so often. Both men offered the opinion that they were proud to have shared in that moment.

Charles Grace died at his home in Bonham on February 11, 1906. Funeral services were held at the First Methodist Church conducted by his pastor T.H. Morris. The church service was followed by a Masonic procession and burial in Inglish Cemetery with full Masonic