A Little Ingenuity Was Needed on the Frontier

We are a throw-away society. Walk through any discount store, super market, or department store and count the number of items on sale that have been designed to be used up and discarded. No refills, no adjustments, just ridding one's self of whatever items no longer have a use.

Imagine how our pioneer ancestors would react to this display of waste. Imagine for one minute their disdain for our inability to make-do, create, or even re-use the simplest of necessities. Make no mistake; our ancestors were tremendously creative. There were no "Wallyworlds" on every corner stacked to the ceiling with disposable goods. Instead the ancestor had to create what was needed for a particular reason.

J. Taylor Allen, pioneer Fannin County settler once described such pioneering initiative in his memories, "Early Pioneer Days in Texas."  Seats were simple three legged stools, made of tree branches with buffalo robes or bear skins for the seats. Many a frontier cook, lacking the proper utensil had the skills to bake certain foodstuffs directly in the ashes or embers of the cookfire, notably the time honored hoecake or ashcake. Gourds served for drinking vessels or ladles. Pails, tightly constructed of wooden strips, held the water for drinking and cooking.

Sleeping arrangements were provided in the corners of the pioneer cabins using the ends of two long poles which were placed in auger holes in the logs of the walls. The other two ends were put into one upright log. Rawhide was torn into narrow strips which were then interwoven between the poles. Mattresses were rarely used. Instead dressed skins of buffalo, bear, or deer were laid across the rawhide.

For transportation and hauling supplies, until proper wagons could be made, sleds made of unpeeled logs were pulled by teams of oxen. Metal was in short supply and the plentiful rawhide strips served in place of chains . Plows to till the land were crude affairs made of precious bits of metal and large pieces of wood.

Another pioneer Fannin County settler, Andrew Davis, wrote in his autobiography of the ingenuity of those first settlers along the Red River. As soon as the first crop of corn was dried, the head of the household set about making a type of mortar and pestle for grinding the grain into a coarse meal .

Davis described how his father sawed a block of hard wood into a three to four foot length. Turning the block on end a hatchet or axe was used to chop down into the heart of the block. Next a fire was built in the block; after it burned for awhile, the fire was extinguished; all the charcoal is cleaned from the hole. This process is continued until the hole is large enough. The pestle was made from a round stick about four inches in diameter with one end rounded off. With this the pioneer could pound down on the grain, corn or wheat, until a coarse meal was produced. This was then sifted through a sifter, one of the few utensils brought with the pioneers. The sifted grain was then used as flour and baked into bread .

Davis also remarked that eating utensils, forks, knives, and such were often in short supply. Often broken through rough use, there was little opportunity to replace such items so other tools were often called upon to serve at the dinner table.

As he recalled the incident in later years, Davis remarked that he recounted it "so that the reader may see how scarce the people were of the most needed articles for the comforts of life in the early days of Texas. And this was as late as 1849."

All of these examples of pioneer creativity somehow take a back seat to one ingenious lady who moved with her family from eastern Tennessee to Fannin County soon after the close of the Civil War.

Mary Benton, daughter of James F. Benton of Madisonvi11e , Tennessee caught the eye of a recently discharged Confederate veteran soon after his return from the war. In fact he had begun to notice the young lady on his infrequent furloughs from his military unit. One thing led to another and soon the young couple were married in 1867 .

Soon after the wedding the young bride's parents left for a new life in Texas. Mary sadly watched them go wishing that her new husband Harrison McClure would accede to her wishes and join with the family in Fannin County. However Harrison had a thriving business breeding and selling horses and had no desire to leave. Finally after two years, Mary, who had received a letter from her father urging them to join him, showed her husband the letter which stated that the richest farmland imaginable could be had for $15 an acre in northeast Texas.

As the family made departure plans for a journey that was to take 47 days by wagon, McClure brough his wife nearly a bushel of flour which they were to take with them. Mary McClure had nothing to hold this much flour, but using her ingenuity she looked around the farmstead and she spied the some thing which had recently been harvested from her garden .

A bushel sized pumpkin/gourd was drying on the ground near the garden. "The very thing" thought Mary. She began to hollow out the container until the walls were very thin. Evidently some sections of the gourd began to split as it dried so Mary took a large needle and some twine and stitched up the cracks.

Undoubtedly she must have packed the gourd with some substance, possibly dry sand, to help retain its shape during the drying process. The top which had been sliced off also was stitched on with twine, to one side, to serve as a lid for the vessel. As the family's wagons were packed the now dried gourd was loaded with nearly a bushel of flour for the journey to Texas. Its utility was so pleasing to Mary McClure that she continued to use it for flour storage in the home her busband built for her near Bonham.

This remarkable example of the pioneer spirit can be seen at the Fannin County Museum of History.  (See below) 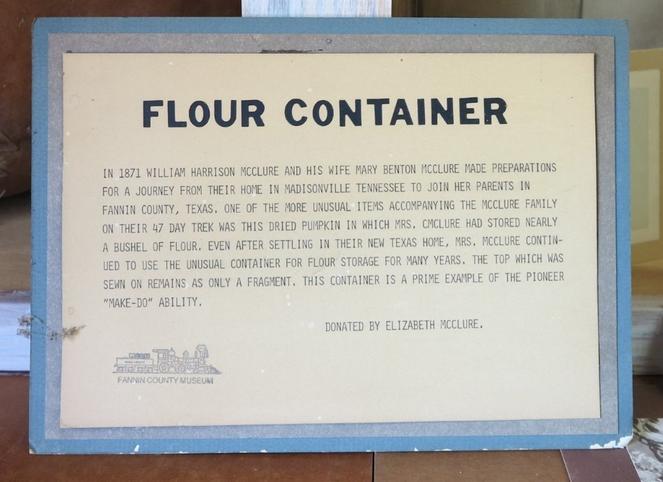 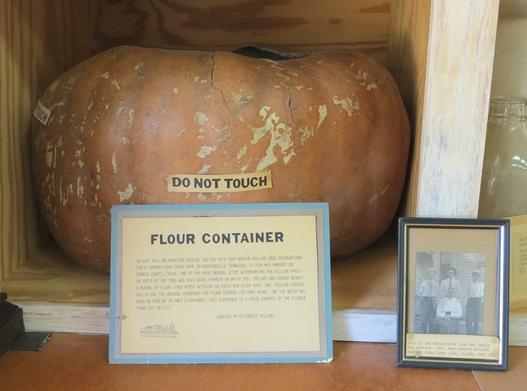