Photo of Bill Scrivner, taken by Erwin Smith, courtesy of 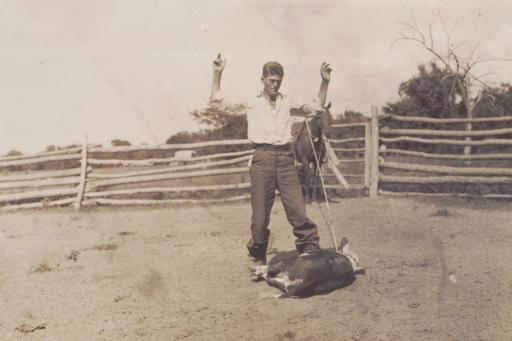 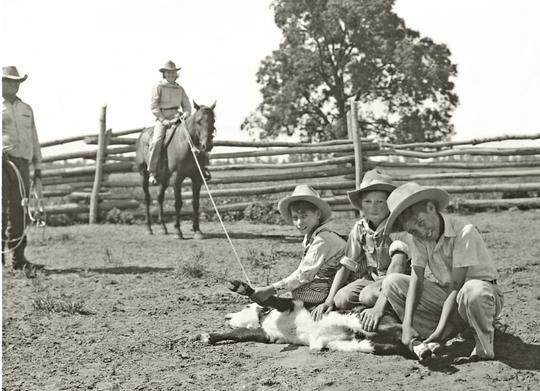 Kathryn Keeton and the History of Tulip, Texas

Kathryn said of Erwin Smith, “I had a place in that man’s life, and he had a place in my life and in Bill’s and in my Mother and Daddy’s.  And when Mary Alice would come in from New York . . . Erwin would always bring her.”

Erwin Smith also gave Kathryn a pair of spurs, which the family still has, saying to her: “You ride like an Indian.”

As a young girl Kathryn would ride a horse to visit her Grandmother Lambert who lived in Ridings.  She would also ride to Mulberry and Corinth for parties and visiting “all the time.”

Kathryn especially remembered one time she rode with her father to drive a load of horses from Tulip to the railroad depot in Bonham, driving the horses down Center Street in Bonham.  She thought that “was about the grandest thing there ever was.”  “I drove cattle through Bonham on a horse.”  “That was a big thrill of mine.”

Kathryn got a horse at the age of 8, but was riding long before that.  It was “the joy of my life” to ride on her horse Charlie.  “I could just lose my life when I was on that horse and riding.”

Every afternoon on the ranch her job was to ride her horse to Red River looking for cattle who might have strayed into the bog.

Gregory Hall asked her:  “Would it have been uncommon for young women to ride horses like you did?”  Kathryn answered:  “I was the only one in the country to do that.” 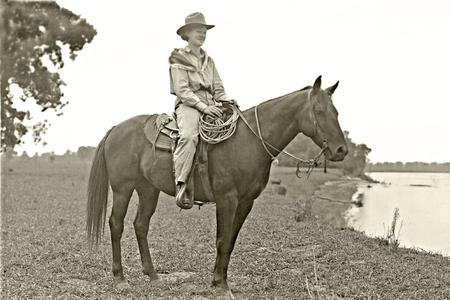 The third photo shows Kathryn in the background with boys in the foreground roping a calf.  Kathryn identified two of the boys as Buck Lorance and Lloyd Dodson.  The man at the back was Wayman Johnson, who was also a well-known Fannin County cowboy.  The third photo was taken in Wayman Johnson’s coral.

Kathryn married Leon Keeton, a farmer and rancher.  They had three sons: Tommy, Kerry and Dennis.  In later years she was involved in helping to run the ranch and farm and preparing the meals for her extended family and hired hands.  She enjoyed finding and restoring antiques.  She was deeply religious.

As previously discussed, Erwin Smith, the famous cowboy photographer, was a frequent visitor to the Gibbs home. Kathryn said that she had known Erwin Smith all her life and that he ate with them frequently.  He took three wonderful photos of Kathryn as a cowgirl, and these photos have made her the most famous cowgirl of Fannin County.  A note on the back of one of the photos notes that the photos were taken on September 8, 1935, which would have been her 17th birthday.  Two of the photos are of Kathryn on her favorite horse Charlie, which she called “the best quarter horse in the country.” In one photo Kathryn is near Red River.

At first the church at Tulip was non-denominational.  Then a Methodist Church was built.  Kathryn was baptized in Club Lake, the forerunner to Lake Fannin.

The Gibbs adopted Bill Scrivner during the time of the depression.  He was five years older than Kathryn and was raised as her older brother.  He was her Daddy’s right hand cowboy, in charge of everything when Dennis Gibbs was away.