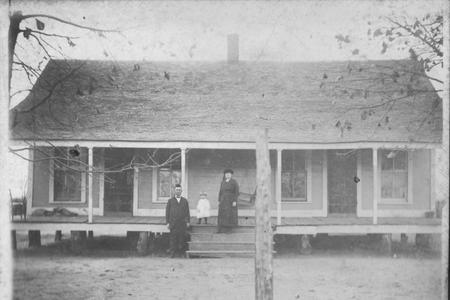 The description of Tulip in “Fannin County Folks and Facts” says that Tulip was the first permanent settlement in Fannin County and was settled in 1836 when Daniel Rowlett and others settled the area.  In his 1885 “History of Fannin County,” W. A. Carter said that Tulip had a Masonic lodge, a school, one general dry goods store, a blacksmith and wood shop, two gins and a mill and a church house.  Mr. Carter remarked on the rich red lands and fine orchards.

Kathryn’s father was Dennis Gibbs, who was brought to Fannin County in the early 1900s with his three brothers after his mother had died in the Indian Territory.  He was by all accounts a very hard working and energetic man who started with nothing and through very hard work and likely quite a bit of smarts accumulated significant land holdings in the Tulip area. 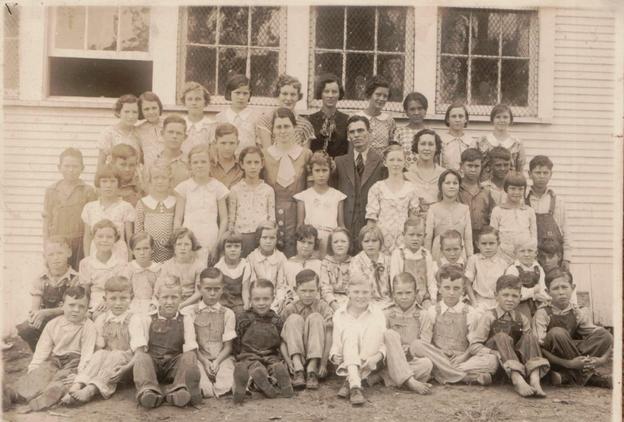 Photo courtesy the Keeton family is of the Tulip school.  Kathryn is the first girl from left on the back row.

GO TO PAGE 2 OF THE ARTICLE

Kathryn Keeton and the History of Tulip, Texas 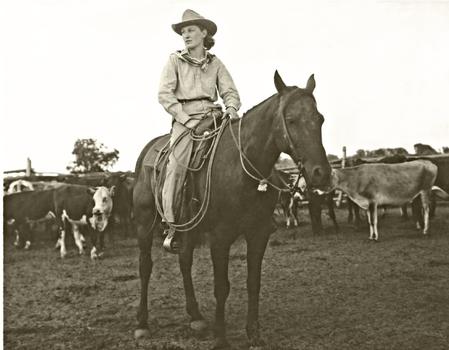 Photo taken by Erwin Smith on September 8, 1935 on

Ten years ago, in 2007, Gregory Hall conducted two oral interviews with Kathryn Keeton, and much of the information in this article is derived from those interviews.

Kathryn was an only child.  Her mother, Amy Lambert, was crippled with arthritis.

According to Kathryn, her father farmed land and used hired hands for that work.  His other business was that of a stockman.  He bought cattle and hogs from the local population and took those animals to Ft. Worth to sell.  As Kathryn said, the local folks who had a hog or two to sell had no one to sell it to, so Dennis Gibbs provided the opportunity for them to raise cash as he took their animals to market.

Dennis Gibbs would also haul cotton to the gins and bring back supplies for the general store in Tulip.  It would take one day to go to Bonham and one day to return.

Kathryn spoke about the remoteness of country living, but said that there was a general store, a post office, a gin and a school in Tulip, as well as of course a church, so they had what they needed and made their own fun.  They had a radio, and enjoyed the Grand Ole Oprey.

She attended the Tulip two room schoolhouse; later a third room was added.  The Tulip school went to the ninth or tenth grade; then the students were bused into Bonham for the 11th grade.  Kathryn graduated from Bonham High School.  In the rural schools at the end of the school year, every school put on a play and community members from all over the area would attend each of the plays.  The plays were held outside and a stage was built at each location for the performances, which were widely attended.

Photo courtesy, the Keeton family, is of Dennis and Amy Gibbs and young Kathryn, in front of their home in Tulip, which no longer exists.

Kathryn Gibbs Keeton, perhaps the most famous Fannin County cowgirl, passed away in July 2017 at the age of 98.  A remembrance of her life also provides a history of the most northern part of Fannin County and the lives of cowboys and farmers in that area in the early part of the 20th century.